In a Ground-Breaking First, Physicists Manage to Hold Individual Atoms

It’s a big moment for quantum physics. A team of physicists from the University of Otago, in New Zealand, has managed to grab individual atoms and observe their unseen atomic interactions.

This is a first in the world of physics and could have a huge impact on future quantum technologies, something that could be integral to our society’s future.

An armful of equipment

In order to hold an individual, microscopic moving atom down the physicists had to use quite a bit of equipment. There were lasers, mirrors, a vacuum chamber, as well as microscopes, not to mention time, energy, patience, and expertise.

READ ALSO!!!!!!
The Endurance of Microbes in Space

Up until now, atoms have only ever been observed in numbers. This experiment offers a previously unseen view of the microscopic world of atoms. 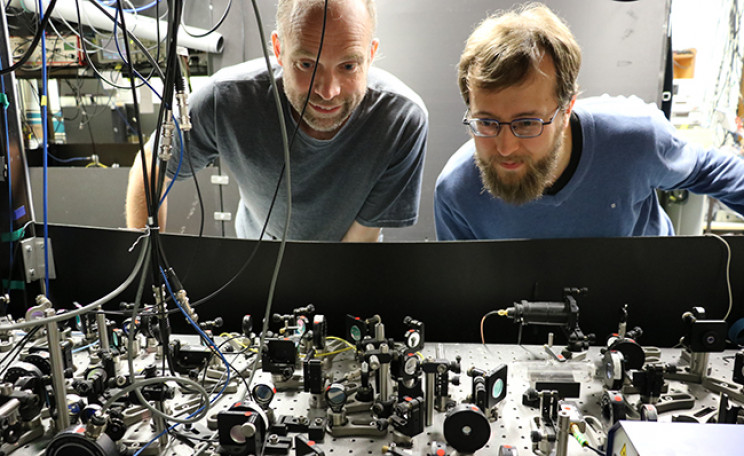 “Our method involves the individual trapping and cooling of three atoms to a temperature of about a millionth of a Kelvin using highly focused laser beams in a hyper-evacuated (vacuum) chamber, around the size of a toaster. We slowly combine the traps containing the atoms to produce controlled interactions that we measure,” said Associate Professor Mikkel F. Andersen of Otago’s Department of Physics.

Postdoctoral Researcher Marvin Weyland continued “By working at this molecular level, we now know more about how atoms collide and react with one another. With development, this technique could provide a way to build and control single molecules of particular chemicals.”

In a first for quantum physics, University of Otago researchers have “held” individual atoms in place and observed previously unseen complex atomic interactions. This is a LASER-cooled atom cloud viewed through microscope camera https://t.co/oYJEFfcaYx pic.twitter.com/QgjNvnRwSx

As Andersen said “Research on being able to build on a smaller and smaller scale has powered much of the technological development over the past decades. For example, it is the sole reason that today’s cellphones have more computing power than the supercomputers of the 1980s.”

He finished by saying “Our research tries to pave the way for being able to build at the very smallest scale possible, namely the atomic scale, and I am thrilled to see how our discoveries will influence technological advancements in the future.”

Viking ‘treasure’ of rare artifacts revealed on a long-lost mountain…

“You are typing in the nonsense again” – Mercy Eke dragged…

Childhood Friends Who Have Known Each Other Since They Were…

A Huge Cloud of Invisible Particles Seems to be Missing From…